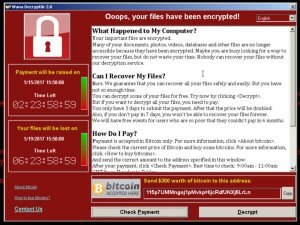 The WannaCry attack, in the last week, has apparently taken many companies and computer users by surprise. The scale of the attack appears to be unprecedented with the UK’s National Health Service (NHS) particularly affected.

That attack, which uses an exploit in the Microsoft Windows platform, claims to encrypt your files before demanding a payment to recover them. Microsoft issued a patch to the latest versions of the Windows operating system in March 2017.

However it appears many users were left vulnerable after systems had not been updated in over a month. Microsoft believe that a majority of home users will be protected as they generally have automatic updates and will have been protected.

So how did many of these organisations get hit by such an attack when there was already a patch available?

It’s clear that a lot of organisations had either not yet installed the patch, had not considered it important enough, or worse, they simply missed it. Another reason is that they are using outdated and unsupported versions of Windows. While this is perhaps more common that many people realise it doesn’t always cause issues of this nature.

Many IT teams will carry out regular risk assessments of their hardware and infrastructure. Unsupported systems may be perfectly safe in the right environment.

Which ever of these reasons caused the attack to be successful in each organisation it’s probably time for those companies to review their processes to ensure the risk of similar attacks is minimised in future.

Review your IT processes

Using Skore app to map out processes and perform an IT process review will help identify and close gaps in existing processes. The simple approach makes it easy to for everyone in the team to have a say. Threats can come from anywhere and getting a broad view of how things work today will ensure that you cover as many angles as possible.

The Skore approach is based on a framework that helps you identify gaps in your process. This makes it particularly effective in this instance. It follows a set of simple questions which asks what happens, who does it and why. This may sound very simple but really challenges the team to ensure that every step in a process is there for the right reason.

In contrast other process tools do not force these questions to be answered. Invariably when teams find it hard to answer these questions they are skipped over. Unfortunately it is these very difficult to answer questions that highlight the inadequacies in a process. In this case Skore app has you covered.

Why not try Skore app today to review and evaluate your current IT processes.